The Potential of Green Hydrogen

Currently, hydrogen is used in refining and other heavy industry processes with approximately 90 million tonnes per annum being produced globally.  At present, almost all hydrogen production is “grey hydrogen” which creates carbon dioxide and other greenhouse gases during the production process. As such, green hydrogen is quickly starting to realize its potential, resulting in the recent announcements of multiple large scale green hydrogen projects.

Present global strategies to meet Net Zero targets are based on broad electrification and renewables deployment. Even with this wide-spread electrification and renewables deployment, it is expected that around 30% of industry, transportation and power consumption will continue to be based on greenhouse gas emitting fuels and energy carriers, these areas of our energy ecosystem are referred to as “hard to abate”. This is where green hydrogen is targeted to play a significant role as a clean energy fuel alternative to further reduce our reliance on greenhouse gas emitting fuels and tackle these hard to abate areas.

As a result, specific green hydrogen utilization opportunities many developers are targeting, and government agencies are supporting, include: long-haul transportation, ammonia production, select heavy industry and manufacturing operations, and other hard to abate power and heating system operations. It is important to note that these are all different uses from the present main use of hydrogen, and so, adoption and adaptation are expected to take some time.

Hydrogen is versatile in its production, its application and in its regional to global scalability, which makes it an attractive fuel and energy carrier to meet global Net Zero goals.

To meet their Net Zero scenario the International Energy Agency has forecast the 2050 global demand for green hydrogen to be in the order of 850,000 MW of electrolysers, or around 150 million tonnes of green hydrogen production. For scale, at Tent Mountain, we are currently proposing a 100 MW electrolyser facility.

How is Green Hydrogen produced at Tent Mountain? 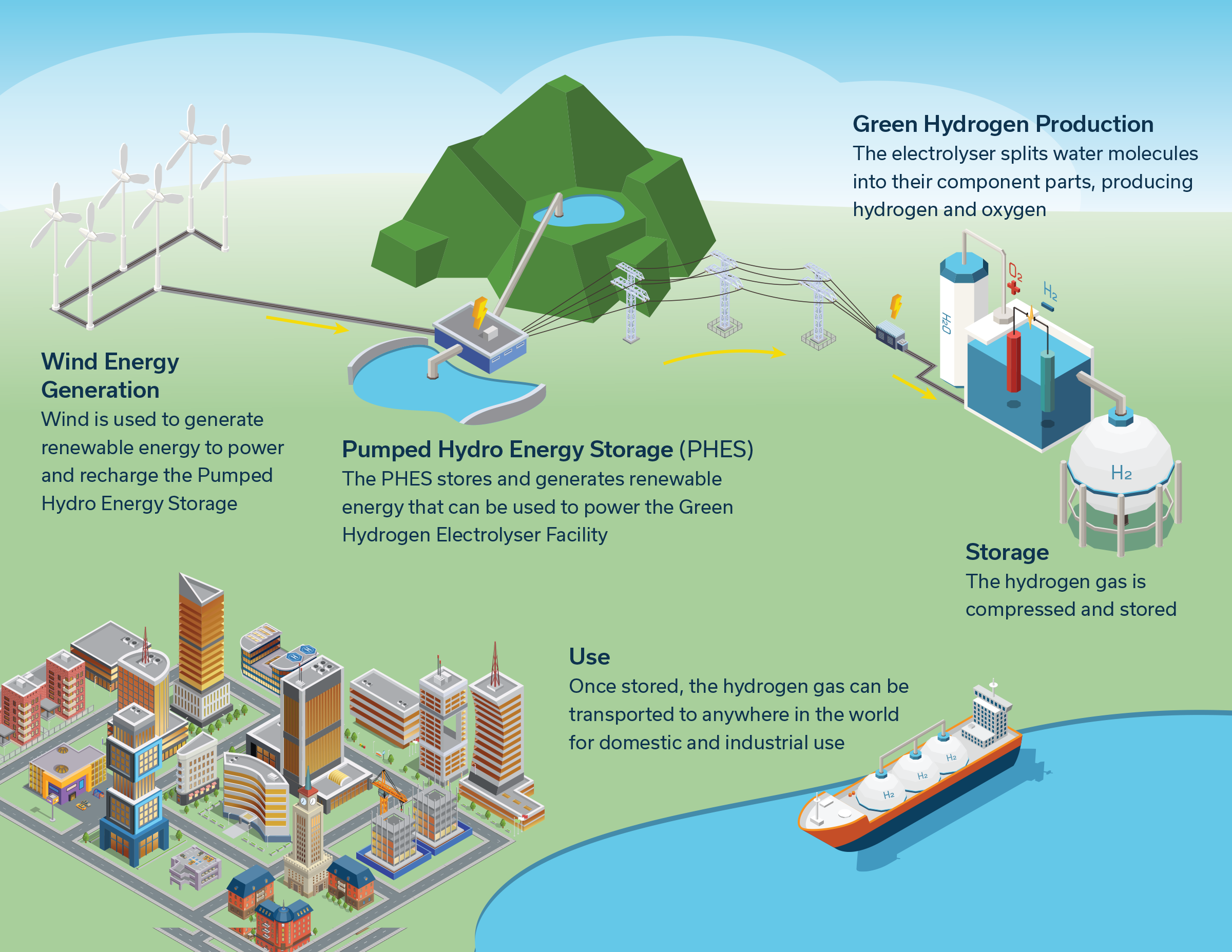 As a multi component renewable energy complex there are cost reductions a green hydrogen electrolyser facility can take advantage of at Tent Mountain, these include: sharing portions of infrastructure, sharing operational staff and facilities, and optimizing the production timing of the electrolyser with the PHES system.

Another competitive advantage for Tent Mountain produced green hydrogen is the close proximity to potential end-users, whom we are in early commercial discussions with.

The Provinces of Alberta and British Columbia are creating a very supportive regulatory environment for hydrogen production development, which includes emerging hydrogen transportation guidelines. Additionally, to encourage the development of low carbon fuels like green hydrogen, Alberta and British Columbia, along with the Federal government, have created funding opportunities and credit regimes to support this important rollout for the emerging hydrogen economy in western Canada.

Use the contact form to get in touch with us.

The quantities expressed in this communication are based on the initial site assessment and subject to change as the development of the TM-REX advances through appropriate engineering, regulatory and environmental approval processes.

The quantities expressed in this communication are based on the initial site assessment and subject to change as the development of the TM-REX advances through appropriate engineering, regulatory and environmental approval processes.